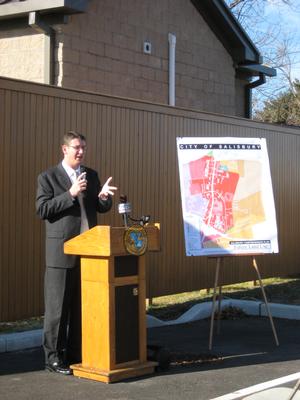 On January 12, 2012, the City of Salisbury held a ribbon-cutting ceremony to celebrate the completion of a new regional sewage lift station on East Naylor Mill Road. The former station, built in 1988, had reached the end of its useful life.

The project was funded by a $2,756,400.00 zero-interest loan from the Maryland Department of the Environment, using American Recovery and Reinvestment Act of 2009 money. The final construction cost came in more than $600,000 under budget.

The ceremony was presided over by Mayor Jim Ireton, who declared, “Today, Salisbury is No. 1 in the No. 2 business.”  A tour of the station followed the ceremony.

A video of WMDT 47 ABC News coverage of the event can be viewed here.