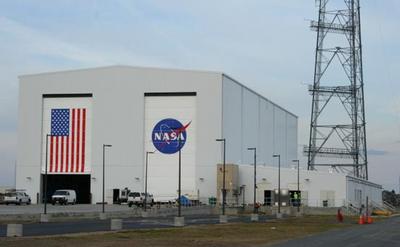 GMB provided architectural and engineering services for the design of the Horizontal Integration Facility (HIF) in Wallops Island, VA. The HIF building assembles Taurus II Rockets, manufactured by Orbital Sciences Corporation. GMB worked in conjunction with MARS and NASA on the project.  The new facility was unveiled in March 2011

GMB’s scope included full A/E services for all phases of the project, including architecture, civil, structural and electrical engineering services.  GMB designed the 37,500 square foot steel structure with a main vehicle assembly bay and a crew support area.  The assembly bay is 60 feet high and the floor area is 90 feet wide by 248 feet long.  This floor area is entirely unobstructed in order to operate 2 overhead bridge cranes, with load carrying capacities of 25 and 70 tons, respectively.

The new facility includes a high pressure gas system, a blast panel system, and an intumescent fire protection paint system.  The deep foundation system, which fully supports the building, incorporates the use of driven pre-cast concrete piles due to the low-bearing capacity of the soils on the island.  The vehicle assembly bay and floor slab system is designed to accommodate the Taurus II transport system. The crane system includes a fully automated control system with the ability to operate both cranes simultaneously.

The building design incorporates a full sprinkler system, and is currently under consideration for a deluge system that meets NASA requirements.  The HIF building is also incorporated with explosion proof lighting and receptacles, as well as an accommodation for a mobile scrubber ventilation system.  In addition, GMB provided a full stormwater management design to meet the requirements of NASA and the state of Virginia, and incorporates a design suitable for a coastal region.