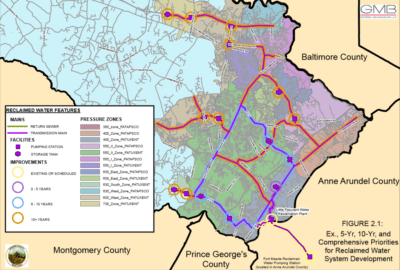 George, Miles & Buhr, LLC (GMB) was engaged by Howard County to help plan development of their reclaimed water system. At the time, the County had the beginnings of a system but no documentation and no definite plan for the future other than the ultimate goal of having a reclaimed water system that is a stand-alone utility on par with its water and sewer utilities. In order to achieve that vision, GMB developed the Conceptual Reclaimed Water System Master Plan, the Reclaimed Water Management (RWM) Plan, and Chapter 5 – The Reclaimed Water Plan for inclusion in the Howard County Master Plan for Water and Sewerage, 2014 Amendment, all based on fulfilling the items identified in the Guidelines for Use of Reclaimed Water developed by the Maryland Department of the Environment (MDE).

The reasons behind the County’s desire to develop a reclaimed water system include to help conserve water supplies as using reclaimed water instead of drinking water reduces the demand on the drinking water system, to help the environment by keeping reclaimed water in the water cycle thus reducing wastewater treatment plant discharges to the environment, to reduce demands on infrastructure by lessening the burden to the drinking water system and the sewage treatment system by delaying or even eliminating some capacity needs, and to provide a low cost alternative to drinking water.  The County envisions reclaimed water being used for irrigation of golf courses, ornamental nurseries, parks, playgrounds, schoolyards, cemeteries, lawns, and landscaping;  filling water bodies such as aesthetic fountains, ponds, and lagoons;  commercial reuse in toilet and urinal flushing, laundries, car washing, window washing, and pressure cleaning;  industrial use for dust control and soil compaction, washing aggregates and making concrete, parts washing and cleaning, equipment operations, and other manufacturing processes;  and as cooling water for towers, air conditioning, and closed loop cooling.